Britain is coming terms with a new era without Queen Elizabeth II at its helm on Friday, as people around the country and the world mourn the death of the monarch.

Tributes have poured in from across the globe for Elizabeth, who died at age 96 after the longest reign in British history, a seven-decade period during which she oversaw the last throes of the British empire, weathered global upheaval and domestic scandal, welcomed 15 prime ministers, and dramatically modernized the monarchy.

The Queen’s oldest son, Charles, who has become King Charles III, will return to London on Friday after spending the night at Balmoral Castle in Scotland, where his mother died.

As the United Kingdom goes into a period of national mourning, the coming hours and days will see an itinerary of events to honor her life and guide the transition ahead. But her passing leaves a void for the UK at a time of steep challenges, amid a change in political leadership and a looming economic recession.

Though Britons rarely looked to the monarchy for political leadership, Elizabeth has been a steady presence highly esteemed by many throughout decades of significant change that saw Britain transform from a war-weary declining imperial power into a modern multi-cultural state.

Elizabeth II:  The British Queen who weathered war and upheaval dies at 96

World leaders from across the globe issued statements honoring Elizabeth’s life, underscoring the global impact she made during her 70-year reign. Elizabeth was head of state not just in the UK but in 14 other Commonwealth realms including Australia and Canada, and was head of the 54-member Commonwealth — the overwhelming majority of which are former colonial territories of the British Empire.

As the day began on Friday and the UK entered its first full day of mourning, church bells tolled in the Queen’s honor across the country and people began to gather outside Buckingham Palace in London. Some shops, including department store chain Selfridges, decided to close as a mark of respect.

Gun salutes will be made in royal parks in her memory, while Parliament is expected to be open for members to pay their tribute.

King Charles III is expected to make a televised address to the nation on Friday afternoon after meeting with UK Prime Minister Liz Truss, and St. Paul’s Cathedral in London will hold an evening service to mark the Queen’s death at 6 p.m local time, which will be open to the public.

As monarch, Queen Elizabeth is automatically granted a publicly funded state funeral, and details will be released in the coming days.

Arrangements will be made for her to be transported back from Balmoral to London, where she is expected to lie in state for several days before her funeral.

Other formalities to come include a meeting of the Accession Council in an ancient ceremony at the 500-year-old St. James’s Palace in London. One part of that meeting will include a formal announcement of the sovereign’s death, and a formal proclamation of King Charles III as the new sovereign.

This is a closed meeting but attended by hundreds of dignitaries and members of the Privy Council, which is a panel of royal advisers, and will be followed by the Garter King of Arms — the person charged with overseeing royal ceremonial duties — reading the Proclamation from the palace balcony and gun salutes will across the capital.

The King has asked for a period of Royal Mourning to be observed from Friday until seven days after the Queen’s funeral, according to a Buckingham Palace statement issued Friday.

Royal residences will also close until after the Queen’s funeral, according to the palace. 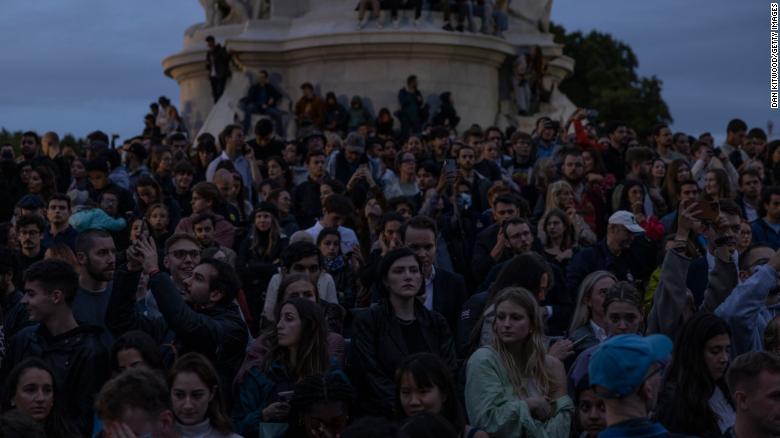 Crowds gather around the Queen Victoria Memorial in front of Buckingham Palace in London following the death of Queen Elizabeth II on September 8.

On Thursday, after her death was announced, crowds of mourners — some visibly shaken by the news — braved downpours to gather outside Buckingham Palace, Balmoral and other royal residences.

Many brought flowers to lay at the palace gates and lit candles. Quiet singing of “God Save the Queen” broke out across the crowd in front of Buckingham Palace, where throngs gathered even as night fell.

Those who gathered at Buckingham Palace on Thursday night told CNN of how fearful they felt about the months to come, without the Queen to offer the type of stability she provided to the UK during times of political upheaval. Britain, which is grappling with its new identity since leaving the European Union, has had four prime ministers in a little over six years.

Kamaljit Singh Kundra, 50, from Coventry, central England, spoke of the sense of “calm” the Queen gave to the UK. “It just felt like we had some sort of hold on the country” while she was on the throne for seven decades.

The outpouring of sympathy included a statement from United Nations Secretary-General António Guterres, who called the Queen “a reassuring presence throughout decades of sweeping change,” and another from US President Joe Biden and first lady Jill Biden, who said the Queen “defined an era.”

In Asia, India declared a day of mourning on September 11. Prime Minister Narendra Modi wrote in a tweet Friday morning that the Queen would be “remembered as a stalwart of our times,” while Chinese leader Xi Jinping called Charles on Friday to express his “deep condolences,” Chinese state media said.

Crowds gather in front of Buckingham Palace to pay their respects following the death of Queen Elizabeth II in Balmoral, on September 8, 2022 in London, England.

LONDON — The death of Queen Elizabeth II marks the start of a new era for the U.K. — but it’s one fraught with economic uncertainty and dampening national sentiment.

The queen, who at 96 was the U.K.’s longest-reigning monarch, died “peacefully” Thursday at Balmoral Castle, Scotland, hours after doctors expressed concern for her ailing health.

Thousands of Brits gathered outside Buckingham Palace in the pouring rain following the news to pay their respects.

The queen — whose 70-year reign spanned the aftermath of WWII, the winding down of Britain’s vast empire, the 2016 Brexit vote and a global pandemic — had come to symbolize a rare constant in a world of constant change. She is succeeded by her eldest son, who was proclaimed King Charles III hours after her death.

Her passing will be marked by a period of solemn ceremony, during which no government announcements will be made until after her funeral, which will be marked with a public holiday in approximately 10 days. The Bank of England has also postponed its monetary policy meeting by a week.

The suspension of normal politics comes just days after the U.K. installed its new prime minister Liz Truss, who was appointed Tuesday by the queen herself, in her final act of public service.

Truss enters 10 Downing Street at a time of unique flux for Britain, inheriting a country saddled with its worst economic outlook in years, a deepening energy crisis and increased inequality.

Hours before the queen’s death, Truss set to work outlining her plans to combat the U.K.’s cost-of-living crisis, unveiling a broad stimulus package designed to help Brits with energy bills, which have soared following Russia’s war in Ukraine.

It comes after a petition to boycott energy bills began gaining traction in the U.K.

The Treasury says the package, which is set to cost over £100 billion, will lower peak inflation by 4-5 percentage points. But economists have warned that the move could complicate the Bank of England’s already mammoth task of curbing record-high prices, by spurring spending on goods and wages.

The U.K. central bank delivered its biggest rate hike in 27 years last month, raising the benchmark to 1.75%, in a bid to bring down in inflation, which is currently the highest among G-7 nations at 10.1%. Investors had widely expected a further 50 basis point hike when the BoE next meets, but some now say it will be forced to lift rates higher and more quickly.

The uncertain outlook comes as the country faces rising recessionary risks. Goldman Sachs warned last week that the U.K. could fall into recession in the fourth quarter of this year, echoing earlier forecasts from the Bank of England.

Briton’s are now bracing for a winter of hardship for both household and businesses.

The British pound has already been on a downward trajectory over the past several months, hitting a 37-year low of $1.1469 on Wednesday.

It piles pressure not only on Truss but also King Charles, Britain’s two new leaders, whose role it will be to rally public sentiment during a period of crisis. The pair are set to meet later Friday in London.

The monarchy also faces ongoing criticism for being outdated and absorbing public finances. Indeed, the cost and ceremony of the queen’s funeral will not be lost on a country in the grips of a cost-of-living crisis.

We are facing a massive cost-of-living crisis in the U.K., obviously, and what people want to see is the Royal Family reflecting that.

“King Charles has already got plans — we’ll see them over the coming months and certainly years — to slim down the Royal Family,” Andrew Roberts, a historian and professor at King’s College London, told CNBC Friday.

“We are facing a massive cost-of-living crisis in the U.K., obviously, and what people want to see is the Royal Family reflecting that,” he said, adding that there may be fewer royals participating in high profile events going forward.

Truss on Thursday called on Britain to “come together as a people” and support its new head of state.

“Queen Elizabeth II was the rock on which modern Britain was built,” Truss said in a speech outside No. 10. “With the passing of the second Elizabethan age, we usher in a new era in the magnificent history of our great country.”

She added that Britons should rally round Charles III to “help him bear the awesome responsibility that he now carries for us all,” she added. “God save the King.”